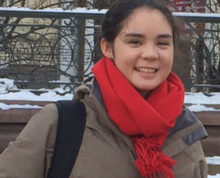 Moscow was a great experience! I went there for a week for the Moscow Conservatory Winter School.

The School was well organised and I was catered for just like the resident Conservatory students – meals and accomodation were all provided on campus. I found it a very educational and enjoyable experience: I was able to receive 4 private lessons with outstanding teachers from their piano faculty (3 lessons with Irina Plotnikova – who is a prize winner of the Sydney International and Tchaikovsky Piano Competitions, and 1 lesson with Alexander Strukov who was on the jury of the Lev Vlassenko Competition last year). Lessons were scheduled every other day, giving me ample time to practise and prepare for my next lesson. I was given one practice room for the whole day, every day. Although the Winter School was for all instruments, many of the students were pianists, so I was surrounded by likeminded people who had similar goals and aspirations.

I was also fortunate enough to gain free entry to concerts at the Conservatory every night of my stay! I listened to many piano recitals, witnessed a Russian choir singing traditional folk and Russian Orthodox sacred music, and I watched an organ concert and a piano/violin duo recital.
The Conservatory also organised some excursions in our free time. We were taken to the Tsaritsyno Park and Palace on the outskirts of Moscow – it was one of the palaces of Catherine the Great. We also saw the flats of Sviatoslav Richter which have been well preserved with his furniture and pianos still in place, plus precious mementos and artwork from friends. There were also many postcards that he wrote to loved ones while in France or Italy – his favourite countries to enjoy the culture and the people.

I also managed to visit Red Square and St Basil’s Cathedral in my own time. I was interested in the Russian architecture and the religious piety of the people. Although I could see the influence of European styles and ideas in their buildings, there was a distinct Russian touch – sturdy structures, wonderful bright colours and patterns. The beautiful sacred icons that are central to worship in the Russian Orthodox religion were on full display in St Basil’s and some other small churches that I visited.

I learnt a lot in Moscow, even how people deal with immensely cold winters! Temperatures got down to -13 degrees which was difficult for me! It was my first time seeing snow too, so that was a new experience.